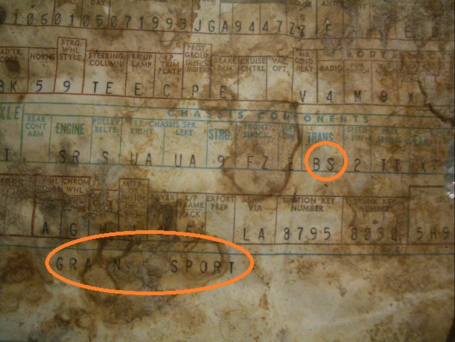 For More information on restoring your 63-65 Rivera, we recommend becoming a member of the Riviera Owner's association by contacting:

One question we always get asked is: How do I know if my 1965 Buick Riviera is REALLY a Gran Sport?  An important question to have answered because Gran Sports are worth about twice as much as a standard '65 Riviera.  Only 3354 Gran Sport models were made in 1965 and surely many of those have been wrecked or crushed.  So, why is it that there are SO MANY 1965 Rivieras that are badged to look like a Gran Sport?  They are worth a lot more money for one and because it's very hard to know if the car actually left the factory that way.  We hear of buyers getting burned after buying a car they thought was a Gran Sport only to learn later it was not.  Consider this: For other car manufacturers, like Dodge for example, the factory options for the car could be learned simply by reading the VIN.  Also, factory records were kept on these optioned cars, so research could be done to learn about the car by looking up the VIN.  Unfortunately, on the first gen Rivieras, such data does not exist or is impossible to find.

Let's put some myths to rest about the 1965 Buick Riviera Gran Sport option.

MYTH #1: You can conclusively confirm the car is a Gran Sport if it has the fender, trunk and glove box badges.  FALSE.  This is probably the easiest move someone can make to pass their car off as a Gran Sport.  For about $200 and a drill, you can add these items.   So, this is clearly does not indicate the car is a real GS.

MYTH #3: If the car has a positraction rear end, stiffer suspension and the quick ratio steering, then you know the car is a Gran Sport.  FALSE!  While these options often were found on a Gran Sport, it was a separate option package.   Even non-GS cars could be ordered with these options.

So, how can one tell with certainty that the car you have (or are about to buy) is a real Gran Sport?  It all gets down to PAPERWORK.  In our estimation the only 100% way to verify if you have a Gran Sport is with an original window sticker or better yet, a BUILD SHEET.  Yes, Buicks had Build Sheets!  Unlike Mopars, where the build sheet was usually thrown behind the seat on the assembly line, GM was very inconsistent about where they put their build sheets in Buicks.  We bought a 65 Riviera years ago, and we found the build sheet UNDER THE CARPET!  And sure enough, we saw that the Gran Sport option was clearly indicated on the Build Sheet.  Here is a picture of that build sheet for reference: